The story of Siri and his family

Siri was born into a family that owned some land and their own house. Unfortunately, he wasn't academic so despite his father's best efforts he didn't achieve any qualifications. However, he worked hard and as an adult owned his own house and inherited the land from his father.

He married a good woman and life looked comfortably promising. They had two children, first the lovely Dilini and then their son Ravindu.

Then when Dilini was a little girl she developed a particular kind of brain tumour which also affected her heart.

Thinking he would get better treatment for her, Siri took Dilini to the hospital in Colombo for treatment. With all the traveling and expenses he soon ran out of money. The health of his daughter and her recovery was more important to Siri and his wife than money, so they sold the house and land and went to live in a very small semi derelict house. 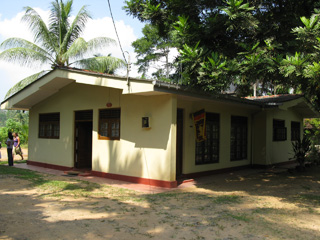 Their original house with adjoining land 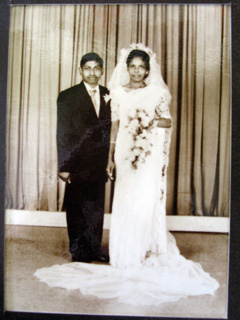 It all started out so hopefully.....

Over time, Dilini has recovered but her growth has been stunted by the treatments and she is not strong. She is nearly 14 years old but looks more like 9 as you can see from the photo. Dilini is often ill, at which times Siri takes her back to Colombo Hospital. The anxiety and poor diet has also taken its toll on his wife's health, too.

Siri managed to secure a menial job in a hotel about 18 kilometres away, but he had to take 3 buses to get to it each day which meant he had very little money left from his wages.

He had been running a tuk tuk job by leasing a vehicle from the bank but it was impossible trying to keep up payments from what was left of his low wage. In addition, where he lives is not well placed for picking up fares and he had few hours left over from his job to work as a driver, anyway.

Unknown to him, the Volunteer Project started. The extra work involved in looking after volunteers' needs put quite a strain on Janaka and Manel. With a demanding occupation, 4 children and the large house with volunteer accommodation it was too much despite the help from Manel's sisters. Janaka knew of Siri's multiple problems including the fact that the hotel job just wasn't working out for him. So, he offered him a job at their house, helping around the house, garden and with shopping. Siri accepted.

It was cheaper for Siri to leave his vehicle parked at Janaka's house and bus in and back each day on a single direct route. This also meant that his tuk tuk was at the accommodation ready for the volunteers to employ him as a taxi driver to and from their work places, the beach and shopping. So, he has a small wage which is paid from some of the profits from the volunteer fee and a small income from driving the volunteers around. They get a good deal too as he charges less than most drivers.

At this time, three volunteers have visited Siri at his home. He takes them there and back for only 300 rupees just to cover his fuel. The family LOVE to have visitors. It helps them to feel that they matter. They always rush out to get you a soda and bananas, then show you round their home. Janaka's daughter Samadhi likes to go with the volunteers so that she can see Dilini. She also acts as interpreter as the family don't speak English.

The family's house is very run down. Siri's father in law, as honoured parent, has quite a nice little room but the bedroom the family all sleep in is dire. The kitchen is ........ well just look at the photo. Until Jun 2010 the only source of water was from a well that dries up when there are droughts during which times Siri fetched the water from over a kilometre away. A UK donor provided half the money for a pumped well, water tank and tower and outside tap. Two other donors supplied another quarter of the money and profits from the project volunteer fee have paid for the other quarter. Siri now has a well at his house so they have running water coming out of a tap outside the house. The water is pumped to a tank on a water tower so it would be possible, with financial help, for this to be extended into his house to have water in the kitchen and perhaps a simple shower room and toilet. It would be wonderful if volunteers were able to help with this. 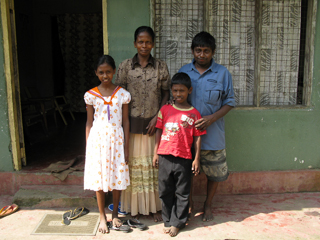 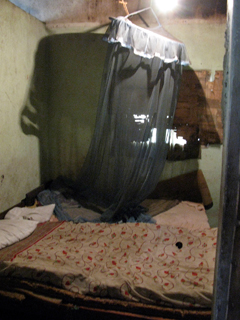 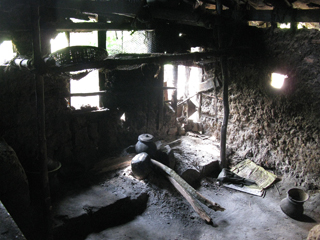 So, life is beginning to look up again for the family. One previous volunteer is helping with some funding towards Dilini's education. Hopefully, over time, Siri will be assisted to fix up his house to an acceptable standard. Already, the extra money from being employed by the project, the volunteer tuk tuk fees plus occasional gifts of food and toiletries from volunteers are making a slow but steady improvement to their morale and lives.

On behalf of Siri and his lovely family, we would like to thank everyone for their kindness to them.